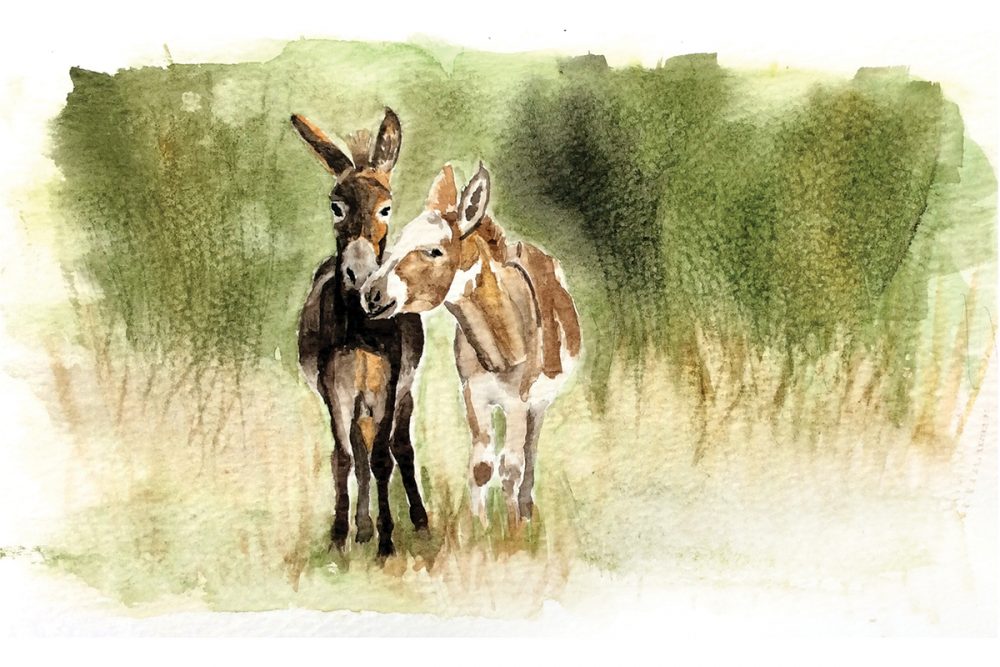 Have you ever read the incredible little prophecy in Genesis 49:8-12? Its surprising prediction of part of the gospel story may not be so familiar to you. It contains one of the earliest forecasts of Jesus’ life-giving work on the cross:

“Judah, you are he whom your brothers shall praise; your hand shall be on the neck of your enemies; your father’s children shall bow down before you. Judah is a lion’s whelp [cub]; from the prey, my son, you have gone up. He bows down, he lies down as a lion; and as a lion, who shall rouse him? The scepter shall not depart from Judah, nor a lawgiver from between his feet, until Shiloh [Messiah] comes; and to Him shall be the obedience of the people. Binding his donkey to the vine, and his donkey’s colt to the choice vine, He washed his garments in wine, and his clothes in the blood of grapes. His eyes are darker than wine, and his teeth whiter than milk.”

In Genesis 49, Jacob blesses his sons before he dies. Judah will be highly praised and take the prominent place among the tribes of Israel (v. 8). He is likened to a lion (v. 9). Judah will be the ruling tribe until Shiloh comes (v. 10). Both Jewish and Christian theologians believe Shiloh is the Messiah and, indeed, a ruling Messiah whom people obey. He will ride a donkey and a donkey’s colt just before He washes His clothes in wine and the blood of grapes (v. 11).

Donkeys and a Lion

With this in mind, it’s interesting what we read about Jesus in Matthew 21:1, 2. He mysteriously arranges two donkeys for His entry into Jerusalem, just before the crowds welcome Him as king and His clothes are covered in blood at the cross. We also know that Jesus was from the tribe of Judah and called the Lion of the tribe of Judah (Revelation 5:5).

Further, as the prophecy foretold, Judah was indeed the prominent tribe in Israel up until the time Jesus lived. Could it be that Genesis 49:11’s mention of washing His clothes in wine and the blood of grapes was a poetic way of prophesying that the Messiah would die a bloody death? I am certain it is.

This early prophecy, most impressively made before Judah and his brothers were established as tribes in Israel, is perhaps not as well known as the prophecy of the two donkeys in Zechariah 9:9:

“Rejoice greatly, O daughter of Zion! Shout, O daughter of Jerusalem! Behold, your King is coming to you; He is just and having salvation, lowly and riding on a donkey, a colt, the foal of a donkey.”

Critics may try to downplay the splendor of this prophecy, quoted in Matthew 21:5, by suggesting anyone could have arranged two donkeys and claimed to be Messiah. However, only someone special could have generated the type of response Jesus did while riding a donkey into Jerusalem.

Matthew 21 describes what is known as the triumphal entry. Everything in this chapter cries out King Jesus, the one whom people shall obey. The red carpet, so to speak, is rolled out before Jesus as He rides the donkey and the multitudes spread their clothes and palm branches on the road in front of Him. This is reminiscent of Solomon, the son of King David, riding on David’s mule as he was assuming the throne as king of Israel. The crowds back then cried out, “Long live King Solomon!” (1 Kings 1:38-40). Now the crowds cry out to King Jesus, “Hosanna to the Son of David!” In the parallel account in his Gospel, Luke records them crying out, “Blessed is the King who comes in the name of the Lord!” (19:38).

By His actions, Jesus also shows His royal authority by driving out the unrighteous dealers from His Father’s house (Matthew 21:12-14). He demonstrates Messianic power by healing the blind and the lame there. Even the children declare Him to be the Son of David. Everything cries out, King! By the way of the cross to His death, Jesus would be on His way to being raised up (resurrected) to sit on David’s throne, exalted to the right hand of God (Acts 2:30-33).

Jacob’s gospel prophecy in Genesis 49 is also special because it tells us of a great ruler who humbles Himself as a servant because of His great love for us. He not only sits lowly on a donkey, but much more than that, humbles Himself to die a bloody death on our behalf. He didn’t deserve this death, because He was so pure — as white as snow (perhaps a fulfillment of Genesis 49:12 – “his teeth [being] whiter than milk”).

This kind of humble and committed Messiah, who walked among us and died for us, is one we can love and fully trust because He understands our weakness and pain and all the hard things we experience. Hebrews 4:15 puts it well: “For we do not have a High Priest who cannot sympathize with our weaknesses, but was in all points tempted as we are, yet without sin.”

Because Jesus understands us and died for us, the apostle John gave this beautiful prophecy at the other end of the Bible:

From Genesis to Revelation, from Jacob’s prophecy to John’s, you can trust the promises of our Father, who inspired their words. I pray they give you strength for life and true hope for the future.

Justified by the Law Or Saved by Grace? Previous post