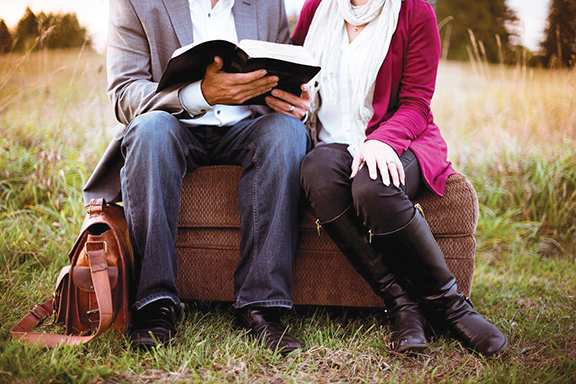 Marriage is an institution of God and is an exclusive lifetime union between one man and one woman for the purpose of perpetuating humanity and enriching human experience. Reflecting the bond between Christ and His church, marriage may be broken only by sexual immorality. Like the Sabbath, marriage dates to Creation week, is intrinsic to the moral law, is reformed in Christ’s teachings, and finds its ultimate meaning at His return.

“It is not good that man should be alone.”

These words of the Lord in Genesis 2:18a have their primary reference to the first man, Adam, whom God had formed from the dust of the ground (v. 7). In a fuller sense, they echo far beyond our first father and apply directly to every man, woman, boy, and girl from that day until now. We were created for relationship and intimacy.

People not only need the Lord who made them but also other humans. That we are social creatures reflects our being made in the image of God. From eternity our Creator existed — not alone but in perfect union as spiritual Father and Son. Because God wanted humans to reflect His own nature, He made us to be loving, relating, communicating beings.

While Adam was still alone, God generously responded to his relational need, saying, “I will make him a helper comparable to him” (v. 18b).

And the Lord God caused a deep sleep to fall on Adam, and he slept; and He took one of his ribs, and closed up the flesh in its place. Then the rib which the Lord God had taken from man He made into a woman, and He brought her to the man. And Adam said:

“This is now bone of my bones

And flesh of my flesh;

She shall be called Woman,

Because she was taken out of Man.”

Therefore a man shall leave his father and mother and be joined to his wife, and they shall become one flesh. And they were both naked, the man and his wife, and were not ashamed (vv. 21-25).

These verses are the Bible’s passage of primary reference regarding marriage, laying a sure foundation for all the Word will later say on the topic. The words marriage or wedding are not used here, but the “man and his wife” phrase conveys that idea — a marriage made and recognized in heaven. . . .

Christians are called to holiness in thought, word, and deed and to express faith in Christ through devotion to God and godly interaction with others. As a result — not a cause — of redemption, believers should 1) develop relationship with God through Bible reading and study, prayer, fasting, worship, and obedience; 2) relieve the physical and spiritual needs of humanity by compassionate social action and gospel witness; 3) oppose pride, envy, indolence, lust, covetousness, and other evils in the spirit; 4) refuse immoral amusements and practices such as pornography, sexual immorality, and homosexuality in the flesh.

The words of Ephesians 2:8-10 form a wonderful bridge between the truth that salvation is by grace through faith to the reality that believers in Christ are created for obedience to God. Paul writes, “For by grace you have been saved through faith, and that not of yourselves; it is the gift of God, not of works, lest anyone should boast. For we are His workmanship, created in Christ Jesus for good works, which God prepared beforehand that we should walk in them.”

Freely redeemed by grace, Christians are called to lives of holiness and good works, forsaking the sin and bondage that was our previous manner of life (Romans 13:13, 14; Galatians 5:16-25; Ephesians 4:17-24).

Demonstrated in various ways, holiness is summed up in the commands of love to God and others (Matthew 22:34-40). True love for God is demonstrated by obedience to His Word, submission to His will, and adoration of His person (Deuteronomy 11:1; John 14:15; James 4:7; 1 John 5:2, 3). True love for our fellowman is demonstrated by caring concern, unselfish relationships, and refusal to harm others (Romans 13:10; 1 Corinthians 13:1-8). . . .

Financial Support for the Gospel

As a result — not a cause — of redemption, believers should give tithe and freewill offerings for the support of the church and its gospel ministry.

Throughout the Bible, God’s people honored Him with gifts from their material possessions. From early times, they gave voluntary tithe and offerings, recognizing God as creator, owner, and benevolent giver of Himself to humanity.

Just as tithe and offerings supported the religious service carried out in ancient Israel, and just as Paul was to receive his living from believers he served (1 Corinthians 9:14), so we are to give our tithe and offerings from gratitude for the love and grace God has so freely given us, not from compulsion of the law.

Our complete stewardship responsibility can be fulfilled only when we yield our time, talent, and treasure to God. Tithing our income to support God’s work is integral to Christian stewardship. It provides a regular, dependable source of income for spreading the gospel.

The Church’s motivation in addressing financial stewardship may be summed up in Paul’s expression to the Philippian church: “Not that I am looking for a gift, but I am looking for what may be credited to your account” (Philippians 4:17).

Let’s be faithful stewards of all God has given so that our accounts may be credited with God’s richest blessing!

Scripture quotations are from the

As a result — not a cause — of redemption, believers should eat for food only those meats the Bible describes as “clean.” For more on this doctrine, see the Q&A on page 11. You can find our Eating the Bible Way tract at publications.cog7.org.

As a result — not a cause — of redemption, believers should regard participation in physical warfare as contrary to a Christian’s humanitarian calling.

A few hours earlier, Jesus had warned an angry, militant Peter, “Put your sword in its place, for all who take the sword will perish by the sword” (Matthew 26:52).

In these two verses, Jesus cuts to the heart of this issue by contrasting the identity and methods of His kingdom with those of earthly kingdoms. In the kingdoms of this world, nations fight against other nations with wars and threats of war. Nations rise and fall by their military strength or lack of it. Soldiers are drafted or hired into the service of defending national borders, or crossing them in the nation’s interests. For the same reason, soldiers kill other soldiers from other countries — while knowing that the enemy could be Christian like them — and are themselves killed. All this is standard practice in the kingdoms of this world.

Christ came armed with a different worldview, a different approach to conflict resolution, and a different kingdom that does not depend upon physical power for its support and defense. Unlike earthly kingdoms that rule over physical lands, His throne exists in human hearts and transcends national borders. . . .

As a result — not a cause — of redemption, believers should avoid intermixing Christianity with extra-biblical practices, as in the common observances of Sunday, Christmas, Easter, Lent, and Halloween. For more on our view on the holidays, see our tracts at publications.cog7.org.

We who have died to sin through salvation in Jesus Christ are called to no longer live in it (Romans 6:2). Rather, we are called to a life of holiness, righteousness, and purity by the grace of God and the power of His Spirit. Our sanctification is the will of God (1 Thessalonians 4:3), who has predestined those who walk in the Spirit to be conformed to the image of His Son (Romans 8:1-30). Let us submit to God’s purifying work. Let us worship and live in the beauty of holiness as those who have been created for good works!