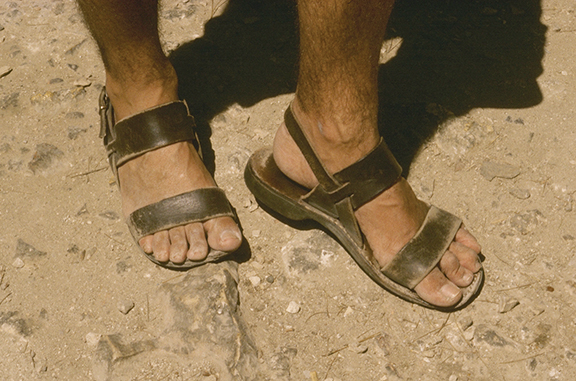 After forty years of wandering in the wilderness, Israel was finally ready to enter the Promised Land. Moses told them that if they loved and obeyed God, He would drive out the nations before them. No one would be able to stand against them, and every place they set their foot would be theirs (Deuteronomy 11:22-25). I remember hearing that story as a child and thinking Wow! Why didn’t they just run?!

Like Israel, you and I have been given the mission to advance the kingdom of God on earth. Jesus says through the power of His Spirit in us, not even the gates of hell can stop us (Matthew 16:18). Then He tells us “Go! Run!”

I remember doing evangelism as a young teenager. On Sabbath afternoons our church would visit local neighborhoods. My idea of evangelism was to knock on the door, wedge a tract into the door jam, then run before anyone answered the door. Despite the obvious parallel between Israel’s mission and mine, I found my own mission quite intimidating.

Francis Chan gives a balance beam illustration on faith that applies here (find it on YouTube). While standing on a balance beam, he describes a series of personal tragedies that made the world a scary place while he was growing up. Then he lies down and starts hugging the beam, and says that our fears make us forget about our routine. He describes this beam-hugging as the safe life, the life that many people choose.

Then Chan asks what a judge is supposed to write on the scorecard for a gymnast who risks nothing and hugs the beam for her entire performance. A safe life isn’t a life of faith; it’s a life of fear. Francis ends by saying that you and I will stand before the Judge one day. He wants to tell us, “Well done,” but how can He if we’ve chosen the safe life instead of a life of faith?

It’s easier to talk about than do. That’s the safe life. It was more or less what I did for far too long. It reminds me of a quote by Pastor Chuck Swindoll: “Learning more truth is a poor and cheap substitute for stopping and putting into action the truth already learned.”

As I matured in my faith, the Holy Spirit reminded me that to be spiritually healthy, I needed to move beyond talk and start doing ministry. It’s natural to be intimidated by our inadequacies, but fear is the opposite of faith. Faith relies not on our abilities but on the power of God’s Spirit. To overcome our fears, we need to focus not on ourselves but on those in need. Perfect love casts out fear (1 John 4:18).

We often equate the Great Commission with evangelism, but it’s much more than that. It’s being a welcoming church; it’s fellowshipping; it’s discipleship. It’s all the things we talk about in our ten-point vision. God gives each of us unique gifts for His work. The Great Commands are loving God and loving others. With His Great Commission, we share His unconditional love with everyone and build the kingdom of God one friend at a time. That’s not the safe life; that’s the faith life.