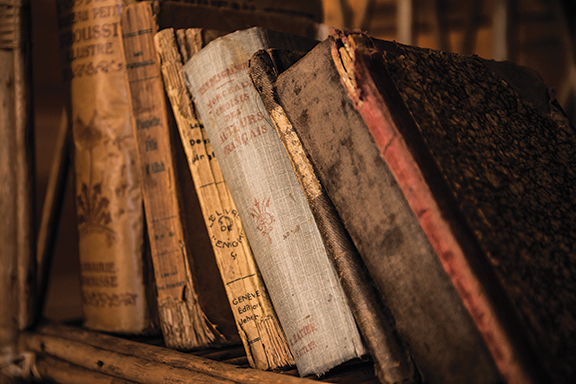 Who am I? Why am I here? Have these questions crossed your mind? The first concerns meaning, the second, purpose. In his Confessions, St. Augustine wrote, “Thou hast formed us for Thyself and our hearts are restless till they find rest in Thee.” With His sacrifice, Jesus gave our lives meaning, and His Great Commission gives us a purpose of eternal significance. When we accept Jesus as our Savior (meaning) and Lord (purpose), we know who we are and why we’re here.

Jesus is the anchor of our soul (Hebrews 6:19). Until we find Him, we’re drifting. Our souls are disconnected, and we don’t know who we are or why we’re here. This isn’t a platitude; it’s historical reality. This history takes a little time to explore, but it will help us understand the culture we live in today.

After three hundred years of intermittent persecutions, Christianity became the official religion of the Roman Empire (ad 380). When the Roman Empire fell (ad 476), the church provided the continuity that political powers lacked. Throughout the Middle Ages (c. ad 500-1400), people looked to the church for their stability and security.

As the church grew in power, its reputation suffered from church leaders who abused their authority. Several attempts to reform the church from within were unsuccessful. It had grown too powerful to oppose because most believed it held the keys to the kingdom of heaven. All divine forgiveness was in its power to dispense or withhold. The church silenced its opposition and controlled its domain through threats of excommunication. Meanwhile, its corruption continued unabated.

The Middle Ages are also called the Dark Ages because people at this time were concerned more about survival than intellectual pursuits. Remnants of better days littered the landscape: Greek philosophy, art, and architecture and Roman roads, aqueducts, and coliseums. In time, Europe regained some affluence, and it emerged from the Dark Ages into the Renaissance, the “rebirth” (1400s). Europe wanted to recapture the glory days, and it focused on the classics: Greek, Roman, and biblical literature.

By 1452, Gutenberg was printing Bibles on his press. These Bibles were too expensive for the public, but scholars like Erasmus and priests like Martin Luther could acquire them. Erasmus soon began to question unbiblical church practices. In time, Luther became aware of the sale of indulgences (selling forgiveness), and confronted the church.

By Luther’s time, the Renaissance had opened the eyes of many to a life less controlled by the church. Furthermore, the printing press made it possible for those like Luther to communicate their ideas quicker. As a result, when Luther couldn’t get the church to reform itself, he started a reformation in the hearts and minds of the people (ad 1517).

The Reformation (1500s) was a needed reform, but it caused a century of war between Catholics and Protestants. After one hundred years of bloodshed, many saw Christianity as a ruthless, self-righteous defense of truth. They no longer equated Christianity with love and compassion. The violence, coupled with the church’s history of controlling and immoral leaders, left many eager to reject Christianity and its “truth” altogether.

For centuries, the Bible had served as the source of Truth. In the 1600s, the rapid advance of science provided an alternate source of truth independent from the church. Science provided answers to the motion of the planets, and the universe suddenly seemed comprehensible. By the 1700s, many people had replaced the Bible with human reason as their highest authority. Auguste Comte characterized religion as superstitious and backward. He believed that society matured from naïve religion to adolescent philosophy and then into adult science. Having progressed to science, society was now ready to rid itself of the dogmatic religious notions that created so much bloodshed. This was the Age of Enlightenment. Its ideas remain with us today.

Loss of meaning and purpose

The Enlightenment enjoyed its freedom from the church with playwrights like Voltaire, who ridiculed Christianity and the church’s authority through wit and satire. Audiences roared with laughter at the expense of Christians. Other men, like Denis Diderot, compiled encyclopedias of knowledge, lacing them with articles that undermined Christian beliefs. By the time Darwin wrote The Origin of Species in 1859, the public was eager for a full rejection of God. They just needed a reason to justify it. The first printing of Darwin’s book sold out on its first day.

As expected, the Enlightenment thinkers also rejected the idea that we’re sinners in need of redemption. On the contrary, they said that man is innately good but becomes corrupted by his competitive environment. If society eliminated selfish competition, it could rid itself of evil and create utopia. This led to the twentieth century experiments of socialism and communism — utopian societies that eliminated competition.

In 1882, the philosopher Friedrich Nietzsche wrote the words “God is dead . . . And we have killed him.” In his writings, Nietzsche wrote candidly about the terrifying consequences of life without God. He said without God, we have no basis for morality, and we should no longer live by a Christian morality that cares for the weak. This sounds eerily like Darwin’s survival of the fittest. Nietzsche also wrote that life without God is devoid of all meaning and purpose. There is no reason for our existence, and we need to have the courage to stare into the abyss of nothingness.

For most, Nietzsche’s philosophy was too terrifying to think about. Instead, they focused on man’s innate goodness and their bright hopes of creating utopia. However, this dream of heaven on earth ended with the nightmare of the Jewish Holocaust and the haunting question it summoned: “How can man be innately good if man is capable of such debased and cruel evil?”

In 1942, Albert Camus wrote The Myth of Sisyphus as a way to cope with Nietzsche’s life without meaning. He opens the book by saying that there is only one serious question left: suicide. If life has no meaning, why do we continue to exist? He then tells the story of Sisyphus, a mythical king condemned by the gods to push a boulder up a hill only to have it roll back down. His fate was to do this over and over as an eternal exercise in futility. Camus concludes that the solution to our futile existence is to imagine that Sisyphus is happy. Camus’ work exposes the horrifying reality of a life without God: We’re left alone to search for happiness in a meaningless life. Camus and many others believed that his work reflects our reality.

Rather than recoil from Camus’ reality, our culture is convinced that no true meaning or purpose exists. It no longer asks, “Who am I?” or “Why am I here?” It no longer seeks answers, just happiness. Jean-Paul Sartre wrote that man is condemned to be free. No meaning exists but the meaning we create for ourselves. This is largely where our secular culture is today. People create temporary meaning for themselves as they pour themselves into their self-interests: money, status, sports, music, arts, and so on. These moments provide superficial contentment, but the only enduring feeling is the emptiness inside. As a result, we talk about the pursuit of happiness rather than its attainment. Happiness always feels elusive and ephemeral.

Source of meaning and purpose

Looking back on history, it’s sad to realize that the church itself caused so many to turn away from Christianity. Whenever we decouple truth from love, we cause great harm. Our secular culture has no moral anchor. It survives only on the ghost of a Christian morality it no longer believes. As the apparition fades, disorientation sets in. Society’s sense of identity is fading, even to the point of confusion in sexual orientation and gender. Jesus is the fullness of grace and truth (John 1:14). Our culture needs His grace and His truth, not one or the other.

You and I know the way. We know that true meaning and purpose exist in Christ. Our lives have worth because He gave His life for us. When we give our lives to Him, we are flooded with transforming gratitude. Christianity isn’t based on a principle; it’s based on a person: Jesus Christ. It’s His Spirit alive in us. We’re secure in our identity because our identity is found in Him. With His presence in us, we know who we are.

Our culture influences us far more than we realize. Many of us follow its empty values and pour ourselves into our self-interests as if no greater purpose exists. We continue to live for ourselves rather than for Christ. As a result, we lose our gratitude for Him, and His love within us fades. We lose our joy and influence. Instead of allowing Christ to rescue our culture through us, we find ourselves in need of rescue again.

The answer isn’t to deny our self-interests. Rather, the answer is to do everything in light of our eternal purpose (1 Corinthians 10:31). We live in a dying world. Jesus gave us the Great Commission (Matthew 28:18-20); we know why we’re here: to lead others to Christ.

Jody McCoy is executive director of the General Conference and lives in Austin, TX.