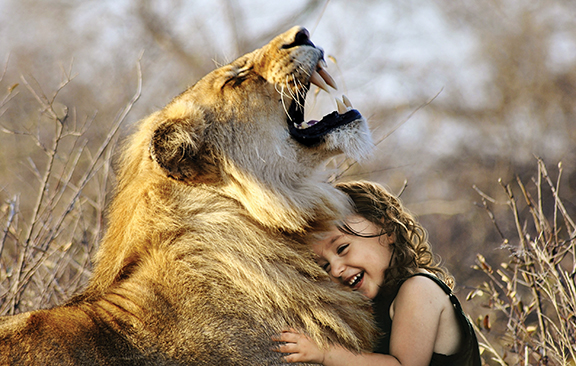 “A picture is worth a thousand words.” We know this from experience. In fact, just reading this saying brings images to mind. For some it is a newborn baby, for others the Twin Towers on 9/11. For me, a picture comes to mind from a courtroom.

In 1995 former professional football player O. J. Simpson was tried and acquitted for the murder of his ex-wife and her friend. The trial gained international attention, and particularly in the United States, where people were mesmerized by and divided over its salacious details and social implications.

Yet of all the memories from that trial, one stands out. At one point the prosecution asked Simpson to put on a pair of gloves that the murderer had allegedly worn. But when Simpson tried to put them on, they didn’t fit, and the world was watching on TV. Johnnie Cochran, one of Simpson’s defense attorneys, took advantage of the eye-catching scene and quipped, “If it doesn’t fit, you must acquit.” He repeated the phrase in his closing arguments, and millions of Americans went on to repeat it, calling to mind the picture of Simpson struggling to put on the gloves.

Twenty-five years later, I still see the scene in my mind. That picture was worth a thousand words. Whatever other arguments, evidence, or testimony were shared during the seven months of trial, that one image remains burned in my memory.

The worth of a picture comes to mind as we continue our journey through 2 Corinthians 5:14-21. In our last article we looked at this passage through the lens of a cosmic courtroom in which all of humanity stands condemned before God. We have the motive of rebellion, the testimony of our own rejection of God, and the evidence of a life that falls short of God’s perfection. We are guilty, but God has found a way to make us innocent. His motive is love, His testimony is the faithfulness of Christ, and His evidence is Christ’s sacrifice on our behalf. Those who accept this pardon are commissioned to be advocates on behalf of others still facing condemnation. Compelled by the love of Christ, with the testimony of God’s grace through Christ and the evidence of our reconciliation to God and one another in Christ, we enter a plea of “Guilty, but forgiven” on the part of the world, and beg them to take the plea.

In the last article we touched briefly on the evidence we have. Through reconciliation with God and each other, we become part of the new creation in Christ. God is on a mission to redeem and restore all that was lost to sin and death. His mission will culminate in the creation of a new heaven and earth in which all will be made right for eternity. But God invites us into the realities of this new creation at the moment we are reconciled to Him. In Christ we become part of a new creation project already underway! Abundant and eternal life begins the day we are reconciled to God and enter His spiritual kingdom of grace in anticipation of and participation in spreading and actualizing that kingdom throughout all creation.

According to 2 Corinthians 5:18, 19, God has given us both the ministry and message of reconciliation. When we think about sharing our faith, evangelizing, or doing outreach in the world, we often think strictly of the message of reconciliation. While the message is vital, it is incomplete without the ministry. That is, our testimony is incomplete without evidence.

So it is that we must not only talk about reconciliation but live it as well. Living out our reconciliation with God and one another proves the truth of our testimony. Why should anyone believe they can be reconciled to God and one another if we are not demonstrating the reality of that reconciliation in our daily lives? This is one of the key — and often overlooked — purposes of pursuing godliness as followers of Christ. Too often we have valued righteousness as a means of attaining or maintaining salvation. When we recognize the folly of this false gospel, we face the question “If obedience does not earn or maintain our salvation, why should we obey?” There are many important answers to this question, all of which come back to our created purpose of loving God and loving one another.

But the love we are called to is not a love we practice for ourselves, even for the noble pursuits of sanctification and righteousness. Rather, it is a love that gives, that serves, that sacrifices for others. This is the nature of God’s special kind of love: agape. Our practice of godly living, particularly with one another in community, is not chiefly for us but for others. Our obedience honors and glorifies God, and it invites others to glorify Him (Matthew 5:13-16). Paul highlights this reality in his letter to Titus when he gives specific instructions in righteous living to older men and women, younger women and men, bondservants and masters. The stated purpose for this righteous conduct in view of a watching world is to

adorn the doctrine of God our Savior in every respect. For the grace of God has appeared, bringing salvation to all men, instructing us to deny ungodliness and worldly desires and to live sensibly, righteously and godly in the present age, looking for the blessed hope and the appearing of the glory of our great God and Savior, Christ Jesus, who gave Himself for us to redeem us from every lawless deed, and to purify for Himself a people for His own possession, zealous for good deeds (2:10b-14).

To “adorn the doctrine of God our Savior” is to make it appealing, to put it on full display, to draw attention to its wonder and beauty and grace. This is the role of our good works, for which we were re-created in Christ Jesus (Ephesians 2:8-10). Our practice of holiness is for the sake of the world, so they can see evidence to support our testimony that we are indeed reconciled to God and to one another and that they too can be reconciled in Jesus Christ. As Jesus said, the world will know we are His disciples by our love and unity (John 13:35; 17:23). The compelling proof does not come in the complex and abstract arguments of philosophers but in the simple and concrete habits of demonstrating God’s love together in community. Christians are called not simply to say, “God loves you . . .” but to add, “and I can prove it.”

Upon returning to his home country of England after a long career as a missionary in India, Lesslie Newbigin found himself in a post-Christendom culture. The words of Christians and churches were no longer implicitly trusted as true or authoritative. He found a new “mission field” right in his backyard where words alone no longer carried much weight. In fact, Newbigin discovered a world in which the actions of the church had not matched her lofty language, and instead had created a crisis of credibility for the church in the surrounding culture. In response, he coined one of the most quoted phrases in the missional movement in The Gospel in a Pluralist Society: “. . . the only hermeneutic of the gospel, is a congregation of men and women who believe it and live by it.”

Hermeneutic comes from a Greek word meaning to reveal, describe, or explain. Hermeneutics refers to the work of studying Scripture to understand, interpret, and apply its meaning. It is a word used in John’s Gospel when he writes, “No one has seen God at any time; the only begotten God who is in the bosom of the Father, He has explained Him” (1:18). The meaning of the word translated “explained” is summed up well in the Amplified Bible: “He has revealed Him and brought Him out where He can be seen; He has interpreted Him and He has made Him known.”

The incarnation of the Word who was God (John 1:1, 14) has revealed the unseen God to us in flesh and blood. God spoke in various times and ways through prophets, angels, and even theophanies, but His greatest revelation came in Jesus Christ (Hebrews 1:1-4). As Howard Hendricks wrote in Teaching to Change Lives: Seven Proven Ways to Make Your Teaching Come Alive, “God’s method is always incarnational. He loves to take his truth and wrap it in a person.”

As followers of Christ, we are compelled by love not only to preach the message of reconciliation, but also to live the ministry of reconciliation to God and one another in our daily lives. In this way, we partner with God in His mission to redeem His creation.

Why Be a Leader in the Church? Previous post

After many years of faithful service, the ambassador to a major country was fired. The problem occurred when a dispute arose between his home country and the one he served in. At a press conference, when he was required to speak on behalf of his own government concerning a major disagreement — something that should […]

As I’m writing, the COVID-19 pandemic is sweeping the globe, impacting daily life for billions of people. If the past few months have taught us anything, it’s that we cannot predict the future. I can’t imagine what the world may be like by the time this article is published. What I do know is that […]

We are called to be ambassadors for Christ. We know that. But what might it mean in this season of COVID and change? Make no mistake, we are living in the end. If not The End, an end. Hinges in history — turning points — are tumultuous, but they are also generative. God brings new […]