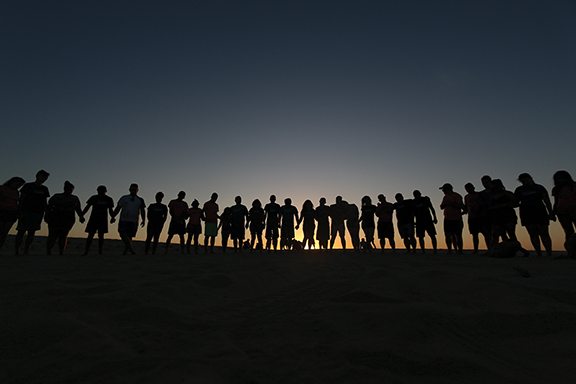 The War of 1812 between Great Britain and the United States ended when the nations made peace in Ghent, Belgium, on December 24, 1814. However, news traveled slowly across oceans in those days, and the bloodiest engagement of the war — the Battle of New Orleans — took place January 8, 1815. Although the war was over, many suffered and died because they had not heard the news.

There is a lesson in this story. This year we’ve walked through 2 Corinthians 5:14-21, exploring the ministry and message of reconciliation. As we come to the end of this series of articles, we read one of the most incredible passages of Scripture:

We are therefore Christ’s ambassadors, as though God were making his appeal through us. We implore you on Christ’s behalf: Be reconciled to God. God made him who had no sin to be sin for us, so that in him we might become the righteousness of God (vv. 20, 21).

What a thought! God has sent us as ambassadors to beg the world to be reconciled to Him. This reconciliation is made possible because of the greatest exchange in history. Jesus Christ, sinless and perfect, has taken on our sin and given us His righteousness. Jesus becomes a sin offering; we become God’s righteousness.

No one has ever received so much for giving up so little. But how did we come to hear this incredible news?

We are called to follow the example of those first Christians as Christ continues to accomplish God’s mission through His Holy Spirit at work in the church. In the interim between Christ’s first and second comings, we are on mission with God, co-missioned to share the gospel with everyone and to make disciples of those who believe.

The passage we’ve looked at this year reveals our role in God’s mission. Christ sends us as ambassadors back to the dark kingdom from which we were saved. However, unlike worldly kingdoms that represent their own interests in foreign lands, Christ’s ambassadors represent the best interests of our enemies as we advance the kingdom of God. This turns the imperialism of worldly conquest on its head, demonstrating the radical difference between God’s kingdom and those of this world. God’s kingdom is a benevolent rule, not a human tyranny. God’s kingdom is founded on love, humility, and service, overthrowing the kingdoms of this world by waging peace, rather than war.

As we’ve seen, love provides the motivation and new creation the evidence, and the words we speak are the testimony of reconciliation. Compelled by love and using our words and actions in concert, we can offer the great exchange to a world literally dying for reconciliation.

But sharing the message of reconciliation requires skill to communicate in our increasingly post-Christendom culture. In it Christianity no longer holds the cultural power and influence it historically exercised in the Western world. While Christianity grows throughout Asia, Africa, and South America, the Christendom cathedral continues to crack and crumble in the West. A lesson those of us in the West could learn from Christians throughout the developing world is this: The gospel is spread through love-motivated and Spirit-empowered word and deed, not through the cultural conditioning and formulaic “evangelistic” programs we developed in a Christendom culture.

The example set by both Jesus and the early church was a commitment to take the gospel outside the walls of the synagogues and buildings where the church met. Limiting people’s encounter with God to an experience in an institutional church setting is as outdated as requiring them to go to a record store to hear music or a theater to watch a movie. We do better to meet them where they are and customize evangelism to their unique context. This is a return to biblical methods of evangelism (1 Corinthians 9:19-23).

In Scripture, the community is not invited to church; the church is sent to the community. May we ever be wary of the anti-Great Commission, so often said among us: “We have the truth, and if the world wants it, they can come and get it.” This statement is an insult to the grace of God. Jesus has commanded us to go to the world with good news. Our role in God’s kingdom is not to sit and wait, but to rise and work!

Becoming witnesses for Christ in a post-Christendom world is not primarily about developing an evangelism program, but cultivating an evangelistic heart. It’s been well said that “Crossing the sea will not make you a missionary, but seeing the cross will!” The formulaic approach to evangelism popularized in past generations is far less effective in our context than simple and personal testimonies of God’s action in our lives. This is what testimony is — a witness telling the truth about what they have personally experienced.

Christians have experienced the grace and power of a living God in their lives. Telling our stories will bear more compelling witness to the gospel than memorizing a formula or a handful of Bible verses. And sharing our own stories with those we have already built trust and respect with will be far more effective than outmoded forms of confrontational evangelism, such as street corner preaching, door-to-door witnessing, and other “drive-by” interactions with strangers.

Further, the message of reconciliation must be paired with the ministry of reconciliation. Words and actions must be combined to truly communicate the gospel. Our words will be as powerful only as the ways in which we demonstrate love for those we’re talking to. Far too often we’ve been guilty of preaching the gospel while not living its reality.

From the place of evangelistic love, the message of reconciliation can be effectively shared in both word and deed. This is a biblically based evangelism model (Matthew 5:14-16; Romans 12; Colossians 4:5, 6; Titus 2; 1 Peter 2:11, 12). Our context calls us back to loving in word and deed as we reenter a world in which Christianity no longer dictates culture. Only as we learn to speak the language of our context can we effectively communicate the gospel in that language.

God has placed each of us in a unique context in our homes, neighborhoods, communities, schools, and workplaces. Just as Jesus came to the world and communicated the gospel in ways people could understand, so we are sent to communicate in a language they can understand.

We began with a tragic story about the War of 1812 and the lives unnecessarily lost to a war that was already over. The only reason was a lack of communication. There was good news for those soldiers at New Orleans, but they didn’t hear it in time.

As followers of Christ, we are entrusted with the good news that the greatest war of all has been won. Jesus has conquered sin and death, purchasing freedom for all humanity. He has taken our rebellion and brokenness and replaced them with abundant and eternal life. He has reconciled us to God. We who were enemies are now invited to become His friends. This is the great exchange!

Yet many people live their lives unaware the war has ended. Many suffer and die in battles that never should have been fought. Many have never heard the good news. The story is told that Swiss theologian Karl Barth was asked, “When were you saved?” He replied, “33 ad.” This is the good news the world is dying to hear!

Those who have good news have been sent. The problem lies in the fact that we so seldom go, and when we go, we seldom preach and practice the good news. All the while, the battle against sin and death rages on, causing countless casualties in a war that Christ won at Calvary two thousand years ago.

May we embrace our identity as ambassadors for Christ and take the ministry and message of reconciliation to the world. Our sin has been exchanged for God’s righteousness. Let us share this great exchange with all those around us!