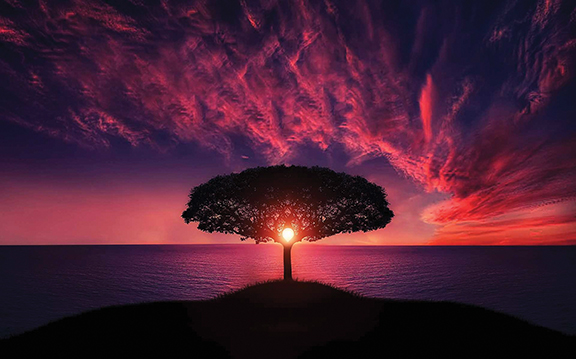 Faced with eviction from the only home they had ever known, Adam and Eve were escorted out of their garden paradise. Adam remembered the warning words of God: “Of every tree of the garden you may freely eat; but of the tree of the knowledge of good and evil you shall not eat, for in the day that you eat of it you shall surely die” (Genesis 2:16, 17).

Adam and Eve would miss their evening walks with their Creator. Why couldn’t they have been satisfied with the fruits of the many other trees God had provided? Hereafter, Adam was destined to till the ground, working with his hands by the sweat of his brow. Possibly repentant and consequently forgiven, the couple had to suffer consequences for this act of disobedience.

Fig leaves had provided scant cover as Adam and his wife realized their nakedness, so God slew an animal to make tunics of skin for them. Though not specifically spelled out prior to the giving of the Mosaic law on Mount Sinai, blood offerings for sin may have been implied herein. The red line of Christ, the sacrificed Lamb, begins.

Out of the ashes of their punishment, Eve remembered and held dear the promise. Yes, there would be enmity between Satan’s seed and her Seed. However, her body would nurture the Seed for a carefully documented Messianic lineage recorded by Moses, Matthew, and Luke, and the resultant reconciliation with God.

Eve’s sons, Cain and Abel, grew to manhood. Cain, the elder, brought a sacrifice to the Lord of his home-raised produce. Abel, designated progenitor of the Messiah, chose rather to offer a flawless firstborn lamb of his flock. Abel’s offering was accepted but Cain’s refused. Satan, determined to thwart God’s plans at any cost, entered into the heart of Cain who, out of envy, killed his brother and was banished by God as a result.

When Adam was one hundred thirty years old, Eve gave birth to yet another special son she named Seth, meaning “appointed”: “For God has appointed another seed for me instead of Abel, whom Cain killed” (4:25). Satan’s efforts to destroy the royal Seed had not succeeded. During the time of Seth’s son Enosh, “men began to call on the name of the Lord” (v. 26). Some scholars understand this to mean public, communal worship of God.

Noah, one link in this lineage, sacrificed clean animals in praise to the Lord following the Flood. By faith, Abraham prepared to offer Isaac as a sacrifice, for he concluded that “God was able to raise [Isaac] up, even from the dead, from which he also received him in a figurative sense” (Hebrews 11:19). The Angel of the Lord stayed his hand, providing a substitutionary ram. Isaac, son of promise, was another special link to the Messiah. His near-death experience is thought to have prefigured Christ’s own death and resurrection.

Other notable links in Christ’s lineage were Jacob (aka Israel), who wrestled with an angel and prevailed (Genesis 32:22-31); Judah (fourth in line of Jacob’s twelve sons), of whom it was prophesied “The scepter shall not depart from Judah, nor a lawgiver from between his feet, until Shiloh comes” (49:10); and David, “a man after [God’s] own heart . . .” (Acts 13:22).

While God gave Moses the law (including those in regard to atoning sacrifices) on Mount Sinai, the people waiting below became restless. After four hundred years of slavery, and being familiar with Egypt’s pagan gods, they coerced Aaron into creating a god they could worship, not knowing if Moses would ever return (Exodus 32:1-14).

Under the Mosaic law, the high priest entered the Holy of Holies once each year with a blood offering for his sins and the sins of the people. The offering was symbolic, for “without shedding of blood there is no remission” (Hebrews 9:22), but “it is not possible that the blood of bulls and goats could take away sins” (10:4). These sacrifices were but a shadow, a reminder of better things to come.

Therefore, Christ shed His own blood as the perfectly prescribed sacrifice — the climax of the red line. His was not a yearly sacrifice, as under the old covenant; Christ died once. And that was sufficient. As our High Priest, He entered “into heaven itself, now to appear in the presence of God for us; not that He should offer Himself often . . . but now, once at the end of the ages, He has appeared to put away sin by the sacrifice of Himself” (9:24-26).

From before the world was, eternity was gift wrapped and sealed symbolically with the blood of God’s covenant. Created in perfection, Adam and Eve had perfect fellowship with God. However, this Edenic pair had tested God’s word, and sin reigned as a result.

Jesus’ last recorded words, “It is finished!” (John 19:30), declared an end to the old sacrificial system. Jesus had performed the task His Father had sent Him to do. When He breathed His last, there was a great earthquake, and the curtain between the Holy and Most Holy partitions of the temple ripped in two from top to bottom, signifying direct access to God in the name of Jesus. Thus, Christ’s spilled blood congealed, sealing the covenant between Him and all who accept this gift to humanity.

The red line continues in all who, through faith, accept Christ and walk the red line in spirit and truth. If you feel you’ve been handed an eviction notice in forsaking your faith, as Adam and Eve were, the way of reconciliation is still open. Christ’s death in the first century AD in essence requited sins confessed and forsaken under the old covenant and beyond. And that is cause for praise!

Why Be a Leader in the General Conference? Previous post