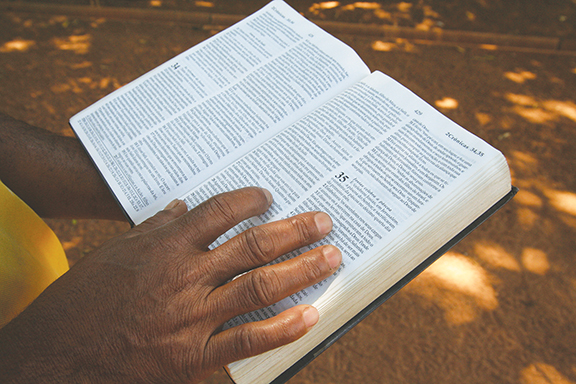 Bible prophecy preserves and strengthens a believer’s hope for the Second Advent. It identifies religious, social, and political trends and events, including the rebirth of the nation of Israel, which point to the imminent return of Christ and the eventual establishment of God’s eternal kingdom on earth.

History in this world — this present age — is like a straight line with a period at each end. It had a definite beginning, and it will have a definite end.

This Christian view differs with other faiths that see history as circular, not linear. For example, some religions champion the idea of reincarnation that accents not the end of life or of the world, but the endless recycling of human lives.

The Bible, on the other hand, informs us that time, space, and all things had an origin: God created them at the start. Without knowing the exact age of the universe, we do know there was a time when it was not. Time began when space began. All this is reported in the Bible’s first verse: “In the beginning God created the heavens and the earth.”

Since the beginning, time has been moving along a straight line toward the end of history as we know it. We are headed somewhere — to a time and place we’ve never been before.

The same Bible that tells the start of this present world also tells us something of its end — -not everything we’d like to know, but what we need to know. The data given in God’s Word about what the future holds and the end of this age is one form of what is called prophecy.

Most biblical information about the world’s start is found in the first book, Genesis. Likewise, a fair share of information about the end comes from the Bible’s later books — the prophets in the Old Testament and Revelation in the New. These, in fact, may be labeled “books of prophecy,” although prophetic chapters are scattered elsewhere. Fully 25 percent of the Bible is prophecy in some form. . . .

Modern times offer many reasons to believe that we live in the closing scenes of history, that the second coming of Christ could happen very soon. The unprecedented events and world conditions of the twentieth and twenty-first centuries include many “signs of the times” that support the imminence of His return.

For example, consider the return of the Jewish people to their promised homeland and the rebirth of national Israel in light of Luke 21:20-24 and other texts. Consider the exponential growth of human population and modern technology, the threat to humanity posed by weapons of mass destruction and other potential disasters in light of Daniel 12:4 and Luke 21:25ff. To the careful student of Scripture, these may be more compelling than the common “signs” that have characterized most of human history, like earthquakes, famines, wars, love of pleasure, and general wickedness.

While some focus on the more sensational events they suppose must happen before Christ can return (rapture of the church, appearance of a final Antichrist, Great Tribulation upon Jews, etc.), doing so seems to ignore a more sure word of prophecy: the Lord’s sudden, surprising appearance during mostly normal times (see Matthew 24:37-39; Luke 17:26-30; 1 Thessalonians 5:1-10).

More distress and trauma could be ahead for the world in the short-term future, to be sure, but we should avoid the temptation to use each new, darksome headline as another proof that Jesus will come in our lifetime. He may not. Prophecy is not given for us to speculate on the time of the end. Rather, it is given so that God’s people, in difficult times, can be comforted that history is headed somewhere and that all God’s promises for the last great day are in our favor!

For those without the assurance that faith brings, last-days prophecies can serve as a warning of what’s ahead for those who reject Jesus, the only refuge against coming storms. Yes, prophetic passages rightly used are valid tools and motivators in evangelism. Jesus Christ is coming again. Prepare to meet your God! . . .

Are these the last days?

Our world has serious problems: environmental pollution; a one-world economy based on precarious foundations; serious moral and social struggles like abortion, pornography, divorce, diseases, drugs, malnutrition, terrorism, and the possibility of nuclear destruction. What a depressing picture!

But do all these problems prove that we live in the last days just before the return of Jesus Christ? Many Christians believe they do. Some have accepted a scenario of specific events that supposedly lead to a rapture and then the Second Coming, using biblical numerics to set a timetable.

To be sure, the end may be near, but there is great danger in so much preoccupation with eschatology. Let’s consider more evidence — from the Bible and history.

Paul and other apostles evidently thought that the Messiah would return in their generation. Frequently, New Testament writers referred to their time as the “last days” or as the “last hour” (Acts 2:16, 17; Romans 13:11; Hebrews 1:1, 2; James 5:3; 1 John 2:18). These references suggest that all time since Christ’s first advent can be considered as the end time or last days.

For all New Testament writers, it was the end. They all died, but the world went on. Down through the centuries, Christians have typically believed that they lived at the end of the age, that they would live to see the second coming of Christ, that the turmoil and problems of their day were sure signs of the end. Many Christians, including well-respected scholars, have set dates based on various “Bible” chronologies. Periods of 2300, 2520, 1260, 1290, 1335, and 1000 years have been manipulated in various ways to predict the end in the years 1000, 1844, 1914, 1975, 1988, 2011, and others. All these dates have two things in common: They made good sense to many people at the time, and they were all wrong.

Why is there such a preoccupation with figuring out when Jesus will return and with seeing every evil as a sure sign of the end? One reason is that Christians long to be united with their Savior at the resurrection — a blessed hope indeed. Another reason is not so godly. It is the same reason people consult fortunetellers and astrologers: They are curious about the future. Unable to rest securely in the loving arms of their Creator, they want to know what lies ahead. And for every such individual, there is some Bible teacher ready with new proofs of how near the end is or of exactly when and how it will occur. . . .

Very possibly we do live in the last days. But how sad that all the gloom and doom, all the end-time prognostication, all the date-setting obscure the real message of Christianity. The fact is that it is the end time for this generation. All of us will die. And unless we have accepted Jesus Christ as personal Savior and received the gift of the Holy Spirit, we are not ready for our end.

On the other hand, if we have become a child of God through Jesus Christ, then we are already sitting in heavenly places in Christ Jesus. Whatever happens in the kingdoms of this earth, our eternal future is secure as long as we continue in Christ by faith.

The Kingdom of God

The kingdom of God (kingdom of heaven) is realized in three phases:

The present kingdom. The spiritual kingdom of grace exists now as God rules in the lives of obedient believers. This kingdom was announced and revealed through the prophets and the ministry of our Lord Jesus Christ. We enter this kingdom when we turn from our sin to serve God through faith in Jesus Christ.

The millennial kingdom of Christ. Jesus will return to earth in power and glory to resurrect the righteous dead, bestow immortality and eternal life upon the resurrected and the living righteous, avenge the saints, and be glorified in them. His earthly reign of one thousand years will be a universal kingdom in which all principalities, powers, and enemies are overcome. At its conclusion, the unrighteous will be resurrected to suffer annihilation at the great white throne judgment.

The eternal kingdom of God. God’s eternal kingdom will begin when Jesus Christ, having put all enemies under His feet, turns the kingdom over to the Father. God will dwell with the redeemed in a new heaven and a new earth where no disappointment, defilement, or death can enter and where righteousness and peace will prevail forever.