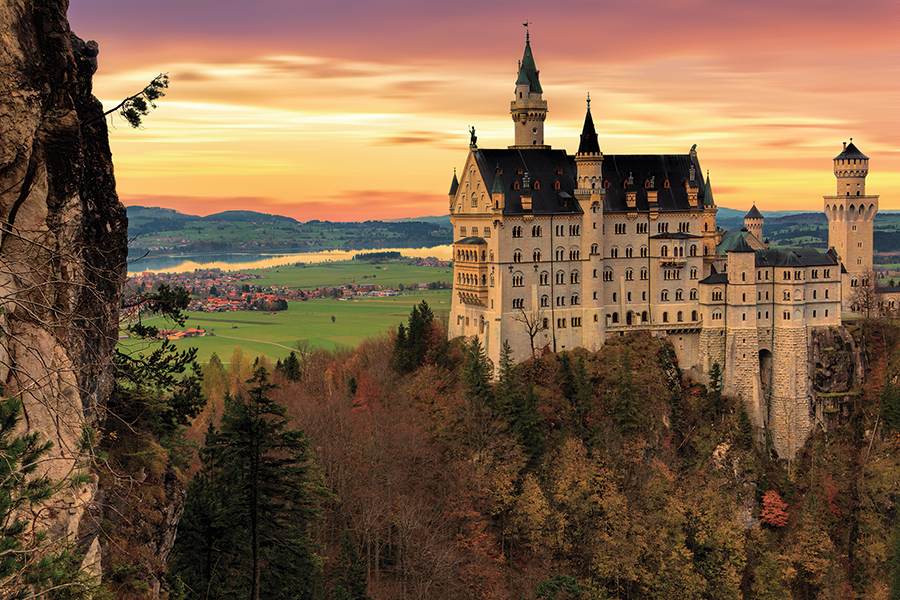 Picture a castle perched high on a hill, massive walls surrounding it as protection from invading forces. There’s only one way into that castle: through the huge drawbridge, controlled by a watchman who determines if that bridge should be lowered. The watchman must be loyal to the king, highly educated as to who is friend or foe. The person should be determined to serve his king, since opening the gate to the wrong person or persons could mean destruction to all inside.

As a child of God, you have such a watchman guarding you: your mind. Our minds are set to carefully protect our souls by questioning, assessing, and considering every idea and thought: Will this please God? Will this thought or action draw me closer to God, improve my witness? Or will it bring harm to the cause of Christ in my life?

We can fix our minds on God’s will for our lives and keep the rottenness of sin out only when we focus on the Cross, on the sacrifice that Jesus made for each of us:

Fixing our eyes on Jesus, the pioneer and perfecter of faith. For the joy set before him he endured the cross, scorning its shame, and sat down at the right hand of the throne of God (Hebrews 12:2).

The Cross-eyed watchman has eyes fixed on Jesus, making every choice in life based on that sacrifice.

But that isn’t always easy to do, given the interplay of the mind, affections, and will.

The mind is the first and, arguably, most important stage in combating the devil and his attempts to draw us away from Christ. Two other stages are also involved in this process: our affections/desires and our will/actions.

Only after the mind gives its approval do our affections and lusts take up their job and long for what the mind has said is good. This craving, once initiated, can be challenging to ignore. That’s why Paul tells us, “Set your minds on things above, not on earthly things” (Colossians 3:2). We must focus our affections on the one true God. Remember the words of those famous three Hebrew captives when faced with the fiery furnace (Daniel 3:17, 18)? Their watchmen were clearly on duty because their affections were focused on the God they served, thus keeping their drawbridge firmly closed against the temptation to worship a foreign leader.

In the third stage of this process, the will initiates action on what the mind has authorized and the affections have longed for. The will says, “If the mind said it’s OK and you really want it, then I’ll make it happen.” Off goes the will to accomplish its intended purpose.

If our minds have been trained correctly through the Spirit and Scripture, all is good. However, if we allow ourselves to believe that a sin is good or permissible, then our affections crave that deception, and our will makes that wrong action happen.

Even with Spirit and the Scripture, why do we still sin at times? How can the devil get by our watchman? James 1:14, 15 says, “Each person is tempted when they are dragged away by their own evil desire and enticed. Then, after desire has conceived, it gives birth to sin; and sin, when it is full-grown, gives birth to death.”

Notice that word enticed, defined by Merriam-Webster as “to attract artfully or adroitly or by arousing hope or desire.” Some appropriate synonyms are allure, bait, lure, seduce, and tempt. Basically, when we sin, we have been caught by Satan’s bait; we have swallowed his lure.

Just as the successful hunter or fisherman carefully considers the right bait to tempt their intended target, so Satan knows the bait most likely to seduce each of us into sin. Just as one bait doesn’t work on all types of fish, so different enticements are used by the devil to trap unsuspecting Christians.

One common decoy the Deceiver often tries is to tell us that there won’t really be a punishment, or, if there is, that punishment will be slight. Remember the serpent’s words to Eve? “You will not surely die” (Genesis 3:4). The serpent didn’t try to tell Eve it was OK to eat from the tree of life — just that God wouldn’t really punish her. We hear that enticement used frequently in our culture: “Do you really think that a loving God would condemn people?”

To help us better understand what happens, author Kris Lundgaard has written The Enemy Within. In it he breaks down five stages of the sin process described in James 1:14, 15.

Dragging away. The mind (watchman) is dragged away from its duties by the deceit of sin. This occurs when it has not been properly trained and/or strengthened to distinguish right from wrong.

Enticing. The affections are enticed and entangled. Once the mind has given its approval, the lust, strong desires, or devotions immediately begin to crave the bait.

Conceiving sin. The will gives its consent; thus, the conception of actual sin. We’ve moved from thinking about the sin to actually committing it.

Birth of sin. This takes place in actions, words, and thoughts, disrupting our way of life as sin is born into it.

Death by sin. Enslavement to sin is spiritual death. The flesh’s actual goal is a hardened life of sin that leads to eternal death.

One model of a man with a faithful watchman who correctly handled sin’s temptation was Joseph. Remember his time in Potiphar’s home? He was a handsome young man who appealed to the boss’s wife. She did her best to entice Joseph, but his mind was on high alert. His response to temptation should be ours: “How then could I do such a wicked thing and sin against God?” (Genesis 39:9, emphasis mine). Joseph’s mind had been well trained, as described in 1 Peter 1:13: “Prepare your minds for action” (NASB). He acted and fled the temptation. He recognized sin and effectively guarded his castle.

As we know, this response, albeit correct, did not appear to end well for Joseph. He was still accused and punished for a sin he did not commit. He spent years in jail, but still he followed what he knew was right. Joseph’s mind was a well-trained watchman, focused on living a holy life, and God rewarded his faithfulness.

Another person whose mind was fixed on following his God was Moses. He was commended because he “chose to be mistreated along with the people of God rather than to enjoy the fleeting pleasures of sin” (Hebrews 11:25). Moses’ mind also correctly identified the right path to follow, and his affections were fixed on that holy path.

Shortsightedness (“sin for a season”) is an all too common affliction in today’s culture. We don’t keep our eyes on the prize, choosing immediate gratification over long-term rewards. So how do we train our minds to be good watchmen, to be alert, to be ready to reject Satan’s temptations and, when necessary, to run from a situation?

We train our minds by walking in the Spirit every day, moment by moment, in dependence upon God, remaining sensitive to His voice and obeying Him.

Just as the castle watchman had to be educated by those more knowledgeable than he to know who was friend or foe, so must we be educated in God’s Word through the Holy Spirit, our Teacher, to recognize sin when it appears (John 14:16, 26).

Here are just a few of the many verses that instruct us on how to train our minds.

The Cross reminds us of how far God was willing to go to rescue us from sin. The question now is “How far are we willing to go to serve Him and give Him full control of our lives?” What better demonstration of God’s love for us do we have than the sacrifice of the Cross?

If we are to be faithful Cross-eyed watchmen, it all starts with a mind fixed on Jesus. “[He] will keep in perfect peace those whose minds are steadfast, because they trust in [Him]” (Isaiah 26:3).

Marcia Sanders writes from Fort Smith, AR, where she attends the Church of God (Seventh Day) with her husband, Randy. Scripture quotations are from the New International Version, unless otherwise noted.