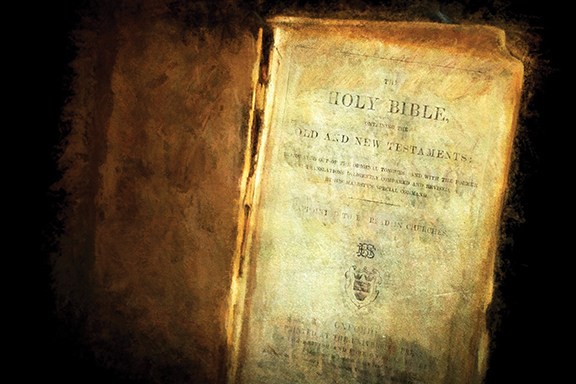 Imagine . . . three children arrive at an old mansion to spend their summer with stodgy relatives. Left to themselves on a rainy afternoon, they discover a colossal attic with giant maps and colorful flags draped on its walls. They find tribal masks from Africa, stone statues from India, a dragon costume from China, a World War II fighter cockpit, and dozens of trunks filled with other treasures. They try on costumes, masks, and scuba gear, fly the airplane and paddle an old canoe, imagining themselves on glorious adventures.

Hours go by. Then they see it: There, at the far end of the room stands a lonely pedestal. On it is a large book, hundreds of years old. Its pages reveal captivating landscapes with mountains, waterfalls, forests, and castles. But hold on: The castles are flying flags that look just like those in the attic! The children flip back to the first pages and read that this book can take them to these wondrous places; just tap a picture twice. The book tells them to explore with courage, for only death can transport them back to the attic, ready for a new adventure.

What a great fantasy. But soon the children have to get back to the boring, real world, with school, homework, and chores — a place where no magical books or adventures exist.

Ah, but wait. That’s not true! There is one Book unlike any other on earth, and it holds the secret to eternal life. It can transform mortals into immortals and transport us to a glorious kingdom of unfathomable majesty, towering mountains, crystal blue rivers, indigo skies, and rolling green hills with vibrant flowers, birds, and butterflies. This kingdom echoes with the sounds of nature, the giggles of children, and the symphonies of worship. It blossoms with the fragrance of flowers and forests. It is, in a word, perfect.

The King in this kingdom is perfect too, as are the people, the lands, and the waters, teeming with life. There is no death here, no sorrow, and no pain. The joy and love are indescribable. This kingdom is eternal — and it’s real.

This Book can take you there. And it’s no fantasy.

This book, your Bible, isn’t hundreds of years old but thousands. It’s bound into a single volume, but it’s really a collection of 66 smaller books written by more than 40 different authors. Let’s meet a few.

The Bible contains accurate details of ancient peoples, cities, empires, and battles because its authors were there. They actually lived throughout the Egyptian, Babylonian, Assyrian, Persian, and Greek empires, and much of the Roman. This is the vast perspective of a Book that took 1,600 years to write.

We can visit the pyramids in Egypt. We can see the remains of Babylon in Iraq, home of the tower of Babel, the fiery furnace, and the lions’ den. We can climb Mount Carmel, where Elijah called down fire from heaven. We can go to Jerusalem and see the temple mount, the Garden of Gethsemane, and the actual streets where Jesus walked. We can sail the Sea of Galilee where He walked on the water. It’s all here, just as the Bible described it, because it’s real history.

The Bible is the living Word of God (Psalm 33:6-9; Hebrews 4:12). Bible.org says its pages declare “God said” or “Thus saith the Lord” over 3,800 times. It was written by human authors guided by the Holy Spirit (2 Peter 1:20, 21). From its divine perspective, this Book reveals the entire history of the world. Genesis tells us how the world began, and Revelation explains how it will end. This Book tells the single unfolding story of paradise lost in Genesis, becoming paradise regained through Christ in Revelation. Its authors didn’t understand all they penned because they also wrote accurate prophetic details about Jesus a thousand years before He was born (e.g., Psalm 22; Isaiah 7:14; Isaiah 53; Micah 5:2). According to reasons.org, the Bible validates its divine authorship with, by some counts, as many as 2,000 fulfilled prophecies.

The Bible also testifies of over 200 miracles, says creation
studies.org, including a global flood, divine plagues, the Red Sea parting, miraculous healings, resurrections from the dead, walking on water, and a talking donkey. Fantastic — yes! Fantasy — no. Miracles reveal a Creator who cares for His creation and intervenes on their behalf. The Bible isn’t a litany of commands; it’s a book of relationships. From beginning to end, its stories show the Creator patiently guiding self-willed people into a loving relationship with Him. It’s a Book of sacrificial love, forgiveness, and restoration.

So is there any evidence these miracles actually happened? Perhaps the greatest evidence comes from the reaction of the Jewish people. They’ve always revered these writings as the words of God, passing them from generation to generation for 1,500 years. They carefully preserved these texts through the gauntlet of some of history’s worst persecutions, sieges, destructions, annihilations, exiles, and utter chaos.

If these miracles never happened, then all two million of Moses’ followers knew his writings were lies. Could two million people conspire to perpetuate these lies, pawning them off onto their own children as the actual word of God with no one ever finding out the truth? Would they?

Suppose the Jews wanted to portray their ancestors as legendary heroes. After all, the Bible calls them “God’s chosen people.” But does the Bible offer a glorious Jewish legacy? No! These writings testify to shameful sins and embarrassing breaches of faith in the people’s respected leaders. And even more to the point, these writings testify of the continual disobedience, abysmal infidelity, and unrelenting unbelief of the Jewish people in their relationship with God. Over and over, the Bible calls them unfaithful, hard-hearted harlots wandering after other gods.

Why would any people carry these words faithfully through unspeakable hardships from generation to generation for 1,500 years, claiming that they are the words of God? . . . unless they knew that these were the actual words of God because God actually confirmed His word through the awesome miracles they actually witnessed. We are greatly indebted to the Jews for their integrity in faithfully preserving the Word of God, unaltered, for us all.

Who needs more? Let’s continue. The Bible exceeds 6 billion copies “sold” — a perennial bestseller and by far the best-selling book in history, according to guinnessworldrecords.com. Most books are printed in a single language; the Bible, or portions of it, has been printed in over 3,200 languages, Wycliffe.net says. There is no other book like this one.

Throughout the centuries, the Bible has been ridiculed, demonized, condemned, burned, and banned. Why? Because it exposes evil and bares people’s souls. Some defy the Book to change them, yet they know it will. So they try to extinguish its light.

In today’s world, modern biblical criticism says we must analyze the Bible objectively, just like any other book. Its scholars cast unverifiable suspicion on the dates and authorship of the biblical books. They question whether prophecies were written after the fact, and note the similarity of biblical miracles to myths and legends of other ancient cultures. Is such skepticism warranted, or is it a ruse orchestrated to emasculate the Bible?

The Bible speaks for itself. For thousands of years, it has undeniably transformed billions of lives. Its truth resonates throughout the deepest caverns of their souls. They feel God’s love permeating their being and flowing through them as they share God’s grace with others. A few ancient texts confirm that Jesus was a real person, but no other book tells us who He was, what He did, what He said, and why He came. The Bible is that book. It transforms mortals into immortals because it is the actual Word of God.

If you think real life is boring, read this Book again. Your great adventure is happening right now, whether you realize it or not. On its pages, you’ll discover Jesus. He’s the secret to eternal life. He’s the King in that perfect kingdom. What a glorious adventure awaits!

Jody McCoy is executive director of the General Conference. He lives in Austin, TX.

Restored & Re-Storied: An Interview with Mary DeMuth Next post

After many years of faithful service, the ambassador to a major country was fired. The problem occurred when a dispute arose between his home country and the one he served in. At a press conference, when he was required to speak on behalf of his own government concerning a major disagreement — something that should […]

As I’m writing, the COVID-19 pandemic is sweeping the globe, impacting daily life for billions of people. If the past few months have taught us anything, it’s that we cannot predict the future. I can’t imagine what the world may be like by the time this article is published. What I do know is that […]

We are called to be ambassadors for Christ. We know that. But what might it mean in this season of COVID and change? Make no mistake, we are living in the end. If not The End, an end. Hinges in history — turning points — are tumultuous, but they are also generative. God brings new […]