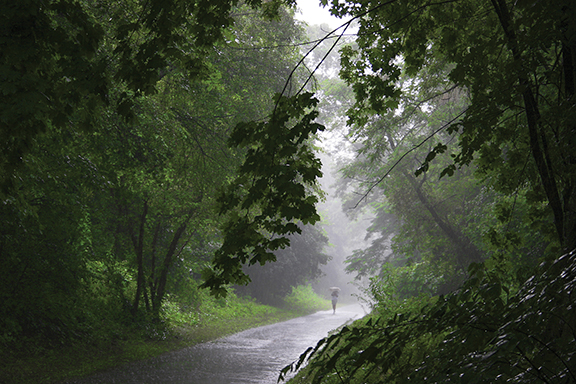 I was baptized by my father and another minister in a frigid northern California mountain stream at a campmeeting site we affectionately called Heaven’s Hill. I was eight years old and had accepted Christ a few nights earlier at an altar call. In the twenty-six years since, I’ve lived in the light of that baptism. Though I haven’t always articulated it in these terms, I’ve been pursuing a baptized life.

We tend to think of baptism as a one-time event that occurred in the past. We describe it as an outward symbol of an inward reality that previously took place. Just as Christ died, was buried, and rose again, so we have died to sin, been buried in the waters of baptism, and emerged to new life. This is all true of baptism.

But the main passage we draw this imagery from is Romans 6:1-11. A fresh reading of these verses indicates that Paul is not focused on a one-time symbolic event in the past — or even on the past event of new birth it pictured. Rather, Paul is talking about an ongoing way of life appropriate for those who have been baptized. Paul is talking about the baptized life.

The baptized life is one in which the inner reality of new birth is incarnated in daily life. Incarnate literally means “in the flesh,” and baptism is intended to incarnate — make tangible and physical — the inner reality of salvation. By salvation we mean far more than an initial moment of new creation and justification from sins. We mean the entire scope of salvation, beginning with justification, continuing through sanctification, and culminating in glorification at Christ’s return. All this is implied and wrapped up in the act of baptism.

When Paul closes this section in Romans 6 with the words “Even so consider yourselves to be dead to sin, but alive to God in Christ Jesus” (v. 11), he’s not referring to a past memory of a one-time act but to a daily, ongoing approach to life — the baptized life.

We see this reality illustrated in Ephesians as well when Paul refers to “one baptism.” Paul begins chapter 4 with a list of heart attitudes necessary to pursue unity (vv. 1-3). He follows this with a series of seven central beliefs that unite us in our Christian identity (vv. 4-6), a discussion of the gifts that give us diversity but ultimately work toward unity (vv. 7-16), and finally an ethic that provides a united lifestyle (vv. 17-32). Each section of the chapter centers on Christ: His lordship over our calling, His central place in our identity, His initiative in gifting the body, and His example of righteousness.

Embedded in Paul’s list of identifying Christian beliefs is “one baptism” (v. 5). While the word baptism is not repeated, it is beautifully illustrated in verses 17-32 as Paul describes the transformation of the believer from sin and death to life and righteousness:

So this I say, and affirm together with the Lord, that you walk no longer just as the Gentiles also walk, in the futility of their mind . . . But you did not learn Christ in this way, if indeed you have heard Him and have been taught in Him, just as the truth is in Jesus, that, in reference to your former manner of life, you lay aside the old self, which is being corrupted in accordance with the lusts of deceit, and that you be renewed in the spirit of your mind, and put on the new self, which in the likeness of God has been created in righteousness and holiness of the truth (vv. 17, 20-24).

Reading this passage, one hears echoes from Romans 6:

What shall we say then? Are we to continue in sin so that grace may increase? May it never be! How shall we who died to sin still live in it? Or do you not know that all of us who have been baptized into Christ Jesus have been baptized into His death? Therefore we have been buried with Him through baptism into death, so that as Christ was raised from the dead through the glory of the Father, so we too might walk in newness of life. For if we have become united with Him in the likeness of His death, certainly we shall also be in the likeness of His resurrection, knowing this, that our old self was crucified with Him, in order that our body of sin might be done away with, so that we would no longer be slaves to sin; for he who has died is freed from sin (vv. 1-7).

Paul’s imagery of laying aside the old self in Ephesians mirrors the crucifixion of the old self in Romans. Similarly, putting on the new self in Ephesians parallels walking in newness of life in Romans. This two-step process — death to sin and a new life of righteousness — is the essence of the Christian life. And it is the reality embodied in the act of baptism. Far from being an event that happened one day in the past, baptism is a lifestyle that must be lived out every day.

So while we acknowledge the symbolic nature of baptism, we should also be cognizant of the ways in which it incarnates redemption. When we are baptized, we are publicly and tangibly participating in Christ’s death and resurrection. The act is not only a confession that we have already died to sin and been raised to new life but also a commitment that we will continue to do so. Baptism, while symbolic, is not an empty symbol. Rather, it is a Spirit-filled act of obedience to Christ.

So motivated and so empowered, baptism is more than the sum of its symbolic parts. Like other righteous actions, it is an outward demonstration of the saving and sanctifying grace of God. It is a visible enactment of the gospel, or to borrow a phrase from Augustine, a “visible word.” Baptism is no mere ritual. Rather, it is intended to be one of the first righteous acts of a new believer, a singular “good work” that entails every other “good work” that follows by providing a blueprint for death to sin and life to God.

No wonder baptisms result in such communal joy and awareness of the Spirit’s presence. Intuitively, we sense that something far more than a symbol or ritual is being performed. Rather, the drama of redemption is played out before our eyes in baptism. If we find ourselves at a loss to describe all that baptism means, this should not cause us to reduce the meaning of baptism to our limited expression, but to marvel at its mystery.

As we marvel at baptism, we discover its full meaning in the baptized life. This life means many things, but let us list four.

First, a baptized life is not just how we live after baptism but actually begins before baptism, when we join in Christ’s death and resurrection through repentance from sin and faith in Christ. Therefore, baptism is an empty and illegitimate act for anyone who has not taken this crucial first step.

Second, those caught up in the baptized life understand that baptism is not optional. Far too many have been persuaded to delay baptism in order to fulfill a man-made tradition or live up to someone else’s expectation. Far too many have avoided baptism out of fear, doubt, ignorance, or apathy. Baptism is not for a special class of Christians or for only those who personally value it. Rather, it is for all those who have begun living the baptized life.

Third, the Christian life following baptism demonstrates and incarnates death to sin and life to God. Baptism is an empty charade if it is not accompanied by a baptized life. But when it is, baptism joins the Lord’s Supper as one of the “living words” that embody and dramatize the entire gospel story in a singular corporate act.

Finally, baptism looks toward its ultimate consummation in Christ’s return. At present, our bodies are out of alignment with our inner person. While our inner person has been spiritually resurrected in Christ, we await the resurrection of our physical bodies. But at Christ’s return, our bodies will be resurrected, victorious over sin and death. Then the baptized life and our redemption will be complete.

It’s been nearly twenty-seven years since I was baptized. I’m still discovering exactly what happened that day in those shallow, teeth-chattering waters. In the years since, I’ve baptized dozens of others in pools and lakes and rivers and church baptistries and prisons and hospital beds. I’m still marveling at the mystery of those events.

And as I marvel, I’m trying to live out my baptism and praying that those whom I’ve baptized are pursuing a baptized life as well.