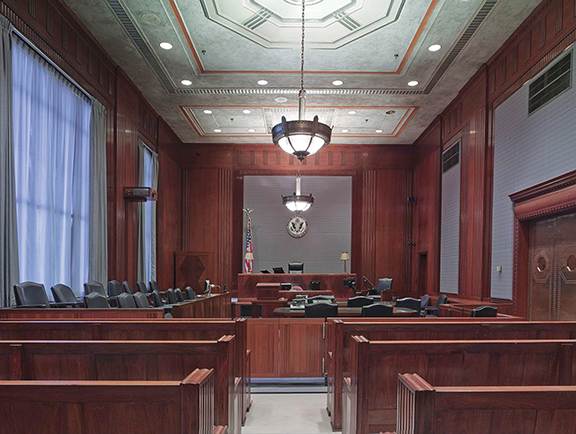 In the last issue of the Bible Advocate I began a series of six articles exploring 2 Corinthians 5:14-21 with a question: “What motivates you?” That article discussed the power of Christ’s love that compels us, and concluded with a call for us to join God’s redemptive mission in the world.

However, Christ’s love that compels us is just one of three important components of our Christian calling. To understand how these components work together to guide our lives, imagine a courtroom. Like most of you, I am no lawyer or legal expert. Much of my understanding of the legal system comes from watching television and reading news about high-profile trials. But I have a basic understanding of how the United States justice system works. In order to prove someone’s guilt, the prosecutor must establish three things: motive, evidence, and testimony.

Motive is a compelling reason for the person to commit the crime. Evidence is physical proof that they did the deed — something that convinces the senses of the jury. Testimony is the verbal affirmation of eyewitnesses to establish that the crime was committed. When the prosecutor can provide motive, evidence, and testimony, they have a strong case. Of course, in this scenario we are working with a presumption of innocence, and the burden is on the prosecutor to prove a person’s guilt.

However, when we look at the plight of the world, the situation is reversed. We know from Scripture that every human being stands condemned before a righteous God. We do not presume innocence; rather, we know that all are guilty and deserving of just condemnation. No one is righteous, no not one. No one is exempt from God’s sentence of “guilty” and the righteous condemnation of eternal death. With a presumption of guilt, the burden is on the advocate to prove innocence.

But how can a guilty human race be made innocent? Only through the gospel of Jesus Christ! Only through Jesus taking the blame and just punishment of humanity on His shoulders can the guilty be pronounced innocent. Only through Jesus’ sacrifice can we pass from death to life and be spared of condemnation. The sacrifice has been made; God has reconciled Himself to the world. All that remains is for the world to be reconciled to God through faith, accepting Christ’s sacrifice. This is the great mystery and promise of 2 Corinthians 5:20, 21:

Therefore, we are ambassadors for Christ, as though God were making an appeal through us; we beg you on behalf of Christ, be reconciled to God. He made Him who knew no sin to be sin on our behalf, so that we might become the righteousness of God in Him (NASB).

This is the good news! And as Paul says, we are “ambassadors for Christ,” through whom God is “making an appeal”— speaking the good news. Christ is the great Advocate, the Mediator between God and man, who stands in a cosmic courtroom, making a case for mercy to triumph over justice by taking the punishment of sin on Himself. But Christ does not advocate alone; He appoints His followers to be His ambassadors, His voice, to advocate on behalf of the world. How do we do this?

For the love of Christ controls us, having concluded this, that one died for all, therefore all died; and He died for all, so that they who live might no longer live for themselves, but for Him who died and rose again on their behalf.

Now all these things are from God, who reconciled us to Himself through Christ and gave us the ministry of reconciliation, namely, that God was in Christ reconciling the world to Himself, not counting their trespasses against them, and He has committed to us the word of reconciliation.

Here we are entrusted with Christ’s motive, evidence, and testimony on behalf of the world. The motive is His love, compelling us to live our lives for the one who gave His life for everyone. Now look at the other elements. The evidence we present on behalf of the world is our renewed and re-created lives. If anyone is in Christ, behold — new creation! The testimony is the “word of reconciliation” that God has committed to us. It is the testimony that God has made a way for humanity to be reborn and re-created — the good news of Jesus Christ!

We are eyewitnesses because we’ve experienced rebirth ourselves. Humanity stands condemned, guilty before God. But God has provided a means of appeal by which all humanity can be saved. Those who accept this salvation join Jesus as advocates for the lost. The lost find abundant and eternal life in Christ, not because of their motives, evidence, or testimony but because of Christ’s motive, evidence, and testimony at work in them.

The wording of 2 Corinthians 5:17 is typically smoothed out in English translations by providing a few words that do not appear in the Greek. The result is wording that sounds rather individualistic: “If anyone is in Christ, he is a new creature.” A more literal rendering of the passage would be, “If anyone is in Christ, look — new creation!” Yes, the individual is a new creature, but more important, they are part of the new creation. They are evidence — indeed, proof — that God is at work re-creating the heavens and the earth. God has not abandoned His creation to sin and death; rather, He is at work redeeming and restoring all that is lost.

How do we know this? Because each person rescued from sin and death and given abundant and eternal life is evidence of God’s gracious work. God’s redemptive plan is at work and evident in the world through our lives. This is the power of a life changed by God. This is what Jesus was talking about when He described His followers as light to the world: “Let your light shine before men in such a way that they may see your good works, and glorify your Father who is in heaven” (Matthew 5:16).

We know that Jesus is the Light of the world. As the moon reflects the light of the sun, so we reflect the light of the Son. In doing so, we demonstrate the continuing success of God’s great mission and the ongoing expansion of His kingdom in the world. The Christian’s call to a lifetime of repentance, holiness, righteousness, and loving obedience to God is a call to shine the light of God into the world as evidence that Christ is real and that His life, death, and resurrection are powerful enough to change humanity.

Christians’ call to be a set-apart people, a holy nation, a royal priesthood, the body of Christ, the family of God, citizens of a new kingdom, is proof the world needs to be convinced that they can be reconciled to God and join His new creation. Those who are in Christ are evidence to the world that God is real and that they have hope!

This is our purpose as Christians in this world. We live together in loving, righteous obedience to God so that the world will be drawn to Christ by the evidence of our participation in the new creation. As we increasingly live into the reality of new creation, our evidence will become overwhelming to the world around us, making the gospel attractive in every way (Titus 2:10).

May we live in such a way that whenever someone sees us, they proclaim, “Look — new creation!”