Summer in the Forest

In 1964, Canadian-born Jean Vanier visited a psychiatric hospital near Paris. That encounter would change his life, as well as the lives of thousands with intellectual and physical disabilities, and inspire a beautiful and critically acclaimed new film, Summer in the Forest. It will open in New York on March 23 in honor of World Down Syndrome Day (March 21) and in Los Angeles on April 6, before a wider release.

Vanier was deeply touched by the plight of the people he found in the hospital, who were often labeled “retards” or “idiots” and locked away and forgotten. Leaving behind a life of privilege, he moved with two intellectually disabled men into a house in Trosly-Breuil, a village at the edge of a beautiful forest north of Paris.

Together, they created L’Arche, French for “The Ark,” which brings together people with and without intellectual and physical disabilities to live in community. Today, approximately 5,000 people with disabilities live in 147 L’Arche communities in 35 countries.

Summer in the Forest is a story of peace, hope, and love for us all. Vanier, now 89, still lives in Trosly-Breuil, where most of the film is set.  He sees the kingdom of God in the people at L’Arche. “The mystery of Jesus is hidden in weak people, fragile people,” he says.

For more information and to view the trailer, visit http://www.summerintheforest.com/.

Sight & Sound announces its newest original stage production DAVID, coming to audiences in Lancaster, Pennsylvania, in 2022. A state-of-the-art live experience, this brand new production will use theatrical wonders to take audiences inside the story of the legendary figure who notoriously rose from shepherd to king after defeating the giant Goliath. The production of DAVID will […]

Thomas Nelson Bibles, a division of HarperCollins Christian Publishing, is pleased to announce the release of the King James Sovereign Collection Bible. King James Sovereign Collection editions draw from the legacy of the trustworthy and timeless KJV with elegant drop cap illustrations leading into each chapter, the exclusive Comfort Print typeface inspired by centuries-old Thomas […] 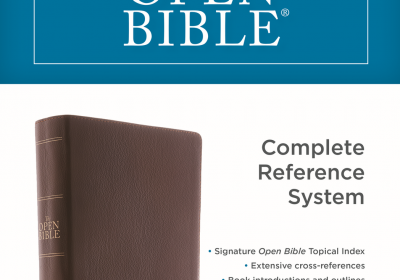 Thomas Nelson, a division of HarperCollins Christian Publishing, is pleased to announce the release of The Open Bible, now available for the first time in the widely read New International Version (NIV) translation. The Bible is a book filled with different genres, like wisdom literature, poetry, prophetic speeches, and historical reporting and was written by many […]