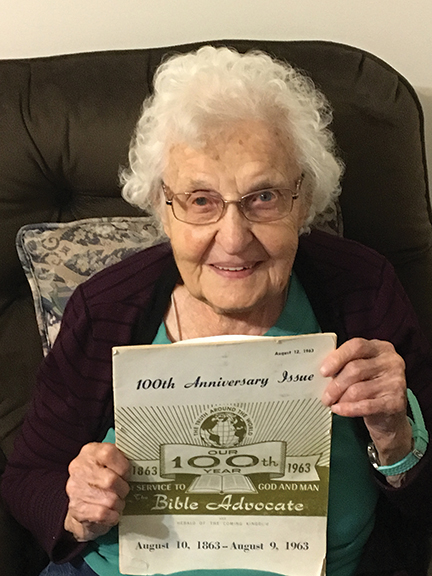 A Life Well Lived: An Interview with Martha Keim

Martha Keim, longtime CoG7 member and Bible Advocate reader, supporter, and distributor (in her local community), was baptized 90 years ago and turned 105 in February of 2019. She was interviewed by her grandson, Robert Grabinsky, in Acme, Alberta, Canada, shortly after her birthday.

Robert Grabinsky (RG): When and where were you born?

Martha Keim (MK): I was born the third of nine children on February 10, 1914, on the farm near Schuler, Alberta. While I was being born in the house, my dad had a mare foaling in the barn attached to the house. It was cold, and the foal would have frozen to death outside.

RG: What were some of your first memories?

MK: I remember collecting dried cow pies with a wagon to burn in the winter if we needed it. Coal was expensive and hard to come by, and there weren’t many trees. We were poor and didn’t have much to play with, so my dad made a ball on a rope from the worn-out collar of a horse harness, and we jumped rope with it. A treat for us was a baked potato with salt in the evening. My first memories of church were at Friedensfeld Baptist Church, where my Uncle Karl Hermann was pastor. The church sat on land my dad had donated, and Dad made sure we were there on time!

RG: When were you baptized?

MK: I accepted the Lord and was baptized at age 15 while in Medicine Hat taking care of my grandmother. I was baptized along with my cousin Fred Reich and his girlfriend, Elsie, by Pastor Adler. None of my family was able to attend my baptism. I sang alto in choir. I’ve always enjoyed singing, and I still do now.

RG: What brought you to the Acme area?

MK: My Aunt Lydia Hermann married Albert Keim of Acme, Alberta. Times were hard during the dry years of the late twenties, but things were better up north at Acme. And so, at 17, I went there to work on their farm to help my family make ends meet. But I was so lonely — one hundred fifty miles away from home. I fed the cows, did field work, [shocked] wheat, and drove a twelve-horse team on the harvester. I worked hard and managed to send $200 home to my family the first year.

RG: How did you become a Sabbathkeeper? What brought you to CoG7?

MK: All the Keims and Fischers kept the Sabbath, which I’d never seen. So I decided I was going to prove to them — especially Phillip Keim, who later became my father-in-law — that Sabbath was wrong. It was mostly Phillip who showed me in the Bible so many places where Sabbath was to be kept that I began to have doubts about Sunday. I told my mother that the CoG7 are the children of God who keep Sabbath . . . but she wasn’t convinced. I once asked my mother, “How come you keep Sunday?” I remember her answer, because it wasn’t good enough for me. She said, “Because my parents did, and my whole family does!”

So my sister Barbara, who had also come up north to work for [the] Fischers (who were another Sabbathkeeping family at Acme) and I became convinced that we had to keep the Sabbath, and we got involved with the Acme CoG7, which was meeting only on a monthly basis at that time.

Barbara and I were promised that if we attended every week and helped clean the church, we could have church every Sabbath. And so with help from the Fischer and Keim families, we had services at Acme every week from then on. Barbara and I both became members.

In 1934, I married Reuben (Phillip Keim’s son), and Barbara married Emil (Karl Fischer’s son), who were Sabbathkeepers at Acme. Our farm was less than a mile from the church, and Barbara’s was even closer. Barbara and I were very close in every way.

RG: Who was the first CoG7 minister you met?

MK: I first met Elder Straub in California, but the Kieszes were the first to serve in Acme. I think they were related to the Keims. I also remember the Bentz, Stiede, and Moldenhauer families being here. Back then, E. A. Straub lived in Jacob Keim’s garage.

RG: What is your favorite Bible verse?

RG: Do you have a favorite hymn?

RG: What are some church publications you enjoy?

MK: I used to read more, but my eyes get tired and I forget quicker than I used to, I guess. I have always liked reading our tracts and the Bible Advocate. When the Bible Advocate arrives, I start at the beginning and go as long as my eyes will allow. It sometimes takes me a week to get through it, and sometimes I need to reread the piece because I forget where I was! When I’m done with the BA, I want others to read it in my lodge, so I pass it around to a few others, who also read it. I like to get it back eventually if I can. But maybe someone else needs it more.

I have quite a few tracts from years ago that I like to have ready or just leave at places where others may read. I have extras, and so, why not? Maybe some good will come.

RG: What are you reading right now?

MK: I don’t watch TV these days, so I read as much as possible and as my eyes allow. A favorite is the “Questions and Answers” section of the BA. I like it when the Sabbath is defended. Those men are so much smarter than me! I’ve met Calvin Burrell and Robert Coulter over the years; I’m sure I’m older than they are, but maybe not by much?! Sometimes Dorothy Nimchuk’s writings are in there too. It is nice to see people I know still writing and serving God in our church. I’ve also got This We Believe and The Story of the Church of God (Seventh Day), and have read them both. I read other magazines and books too, but I think the BA is the best! Jason Overman does a good job. I’ve met him too.

RG: What piece of advice does a 105-year-old have for the rest of us?

MK: Always be truthful, kind, loving, helpful; and obey God. He is your leader in everything.

MK: Do right and fear no one; don’t fear, or you won’t speak what you should.

Editor’s note: Sister Martha Keim passed away March 5, 2019, shortly after this interview was conducted. In her last moments, surrounded by her family, she spoke of seeing them in the kingdom. She passed peacefully and is now asleep in Jesus. We join her family in grieving her loss and thanking God for her life.

Day of Reckoning: A Reflection of John 8:1-11 Previous post