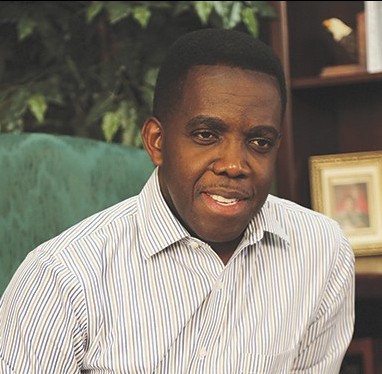 The BA talks with outgoing G. C. President Whaid Rose about his eighteen years of service and his future.

BA: For the benefit of those who are unfamiliar, briefly review your personal spiritual journey.

WR: I was born on the island of Jamaica and raised by my staunch Seventh-day Adventist grandmother. I accepted Christ at age twelve and began my Christian walk as an Adventist.

Meanwhile, my mother found Christ through the witness of CoG7 members and migrated to the US. A compliant teenager, I attended an independent CoG7 with Mom when I followed her to New York City. Pastor Lael Tikili, a Midwest Bible College graduate, oriented me to CoG7 doctrines, whereby I eventually joined and was ordained to the ministry by that congregation, and became its associate pastor.

A series of circumstances then led me to transfer from NYC’s Hunter College to Summit School of Theology in Denver for ministerial training (1982). I served G. C. churches in New York and North Carolina, then returned to Colorado in 1994 with my wife and two children to pastor the Denver church. Three years later, I answered the call to serve as Conference president.

BA: You were not quite 37 when the General Conference gave you the keys to the joint, so to speak. What would you say was the passion that led to your rise to the G. C.’s top position at that age?

WR: The Lord gave me unique opportunities to minister around the Church in the years leading up to my appointment. My work as founder of a grassroots effort called Church Renewal Ministries gave me a platform from which to challenge the Church to spiritual renewal and evangelism, to become the grace-oriented Sabbathkeeping church for which the world waits. After several years of encouraging the Church to do better, either the Church was ready to embrace a new vision for its future or it handed the keys to me out of frustration.

BA: Talk about the importance of vision, and recap your vision of a vibrant twenty-first century CoG7.

WR: Vision is essential to life: “Where there is no vision, the people perish” (Proverbs 29:18, KJV). Vision has been defined as “the picture of a preferable future” for one’s life or ministry. It is coming to see that “there” (that preferable future) is better than “here” (the way things are at present). Casting a vision for “there” creates a common cause, a rallying point around which God’s people find unity and strength as they lay hold of limitless possibilities for the church Jesus purchased with His own blood. Grasping and implementing vision begins with the conviction that if better is possible, good isn’t enough.

When held against the backdrop of our church’s history and culture, the CoG7 vision is an exciting proposition. It’s more than a dream; it’s laying a new theological foundation for a church that stands in Christ alone, recognizing that “Jesus plus nothing equals everything; everything minus Jesus equals nothing.” That conviction informs everything we do, including the way we read the Bible, observe the Sabbath, worship, show compassion, evangelize the lost, treat one another, and make disciples. It’s a call to anchor our identity, security, significance, and purpose in being in Christ, not in being different from other believers. This enables us to live selflessly and courageously, transforming CoG7 into a city on a hill and transforming our world as Christ’s ambassadors.

BA: Eighteen years is a long tenure — time enough for change in any organization. For what CoG7 changes since 1997 are you most grateful?

WR: Some things are difficult to measure, like reshaping culture and core values formed over a long time. Are we the same church we were two decades ago? Christ centrality and quest for Holy Spirit fullness have increased. A worship revolution is in progress. Ethnic and demographic changes increase. We view ourselves as a global church with growing commitment to missions at home and abroad. Many desire to break out of their four walls and minister to people’s deep needs. Our strides in information technology, social media, and interchurch communication, and the doubling of our annual budget, are among the evidences we’re not the same church.

BA: How has the role and stance of CoG7 changed among its peers and counterparts?

WR: The General Conference has grown in ministry capacity, putting it a step ahead. Stereotypical ideas about “Denver” have changed as many look in our direction for a viable CoG7. We enjoy fraternal relationships with Sabbatarian organizations and growing respect from the wider Christian community as we’ve embraced more orthodox views on essential doctrines and as appreciation increases for the Sabbath concept and other CoG7 teachings.

BA: Perceptions are that your first thirteen-and-a-half years in office were largely free of conflict, and the Church’s political winds were with you. But that changed quickly and noticeably a few years back. If this is true, what issues turned the tide for some folks? If handed the second chance, what would you do differently in that difficult year of 2011?

WR: Your assessment is correct, and it was disagreement over polity and ministry philosophy that turned the tide. This came to a head at the 2011 convention near Chicago and has remained a major distraction. It reflects on my administration, so I’m happy to hand the keys to others who can lead us further. The way forward depends on the outcome of G. C. business in Milwaukee. We are a church at the crossroads. Will we move forward by embracing an organizational structure that facilitates greater cohesion and accountability, where leadership and membership mean something? Or will we continue to limp along in defense of local autonomy? Those are the two roads before us.

I now see how my comments in “that difficult year” served only to add fuel to the fire. If given a second chance, I would address my concerns through more appropriate channels.

BA: After being in the G. C.’s top spot for so long, where will you go now? To do what? Can you report on your family’s plans as you prepare to switch hats and homes?

WR: With the busy-ness of life and ministry, we haven’t had time or energy to focus on what’s next. Whatever it is, I don’t want to leap into it without careful thought and prayer. If the Lord gives me thirty more years of ministry, I’d like to spend them doing that one thing He wants — and doing it well. For the immediate future, the plan is to rest, to seek soul refreshment and heart preparation. With faith that God is using this experience to prepare me for what’s next, I wait with patience and hope.

I’m grateful for the support of my family over these years. My wife and children have blessed me in my role, despite its impact on them. I hope to make it up by investing heavily in them in this new season. The conviction that success in ministry at the expense of family is no success at all means more to me now than ever before.

Our extended family is mostly on the East Coast, including our aging parents to whom we’d like to be closer. Our children are now adults and consider Colorado home.

BA: How’s your medical health and vision, compared to ten years ago?

WR: In terms of general health, I’m doing reasonably well these days, though vision remains a challenge. Eighteen years ago I enjoyed 20/20 vision; now it has changed dramatically. I’ve developed a mysterious eye condition for which there is no name and which isn’t treatable. Still, I’ve been able to continue my daily work and frequent travels, making my struggle less obvious to most.

Mysterious words from the apostle Paul surround his disclosure of a thorn in the flesh, which many believe was an eye impediment (2 Corinthians 12:1-10). The text doesn’t identify the thorn, but whatever it was, Paul saw it as a weakness God was using to perfect His strength in him. This is humbling for me. May the Lord’s strength be perfected in my weakness.

BA: What two or three maxims of leadership wisdom would you most like your successor(s) to know without having to learn them the hard way?

WR: Don’t seek after ministry; seek the fruit of a disciplined life (John Wesley). What a leader does for God should be the overflow of what God is doing in him. We teach what we know; we reproduce what we are (John Maxwell). The first responsibility of a leader is to define reality. The last is to say thank you. In between, the leader is a servant (Max De Pree). Successful leadership is a combination of both character and competence. If you have to choose between them, choose character. Keep short accounts. If you’ve been wronged, be David, not Saul. Finish well.

BA: If God called tonight and asked you 1) to give account of your service as CoG7 president and 2) why He should let you into His kingdom, what would you say?

WR: Regarding my service, I would confess the wonder that He would use me in this capacity and regret that though I gave it my best, I wasn’t able to do more. As to why He should let me in, I would appeal only to the merits of Christ’s atoning sacrifice for my sin, in which I trust by faith.BA