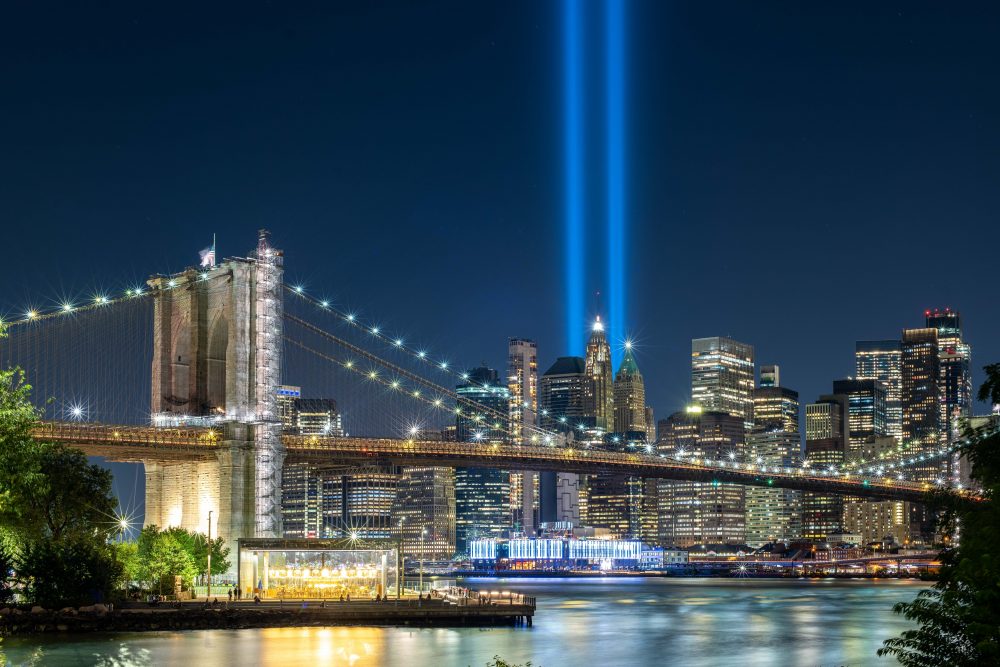 It’s been 21 years since the tragic events of September 11, 2001. I can still remember where I was and what I was doing when I first heard the news, as can you.

I was hosting church leaders who’d come to Colorado at my invitation to pray and cast vision for a new college for our denomination. Plans were to wrap up the meetings that morning and get everyone back to the airport.

But that suddenly changed when a close friend called to say that our nation was under attack, and suggested that I turn the television on.

Setting my breakfast aside, I turned on the TV just in time to witness the second airplane flying into the south tower of the World Trade Center in New York City—captured live!

Soon another airplane slammed into the US Pentagon; another was brought down by heroic passengers. Then both Twin Towers—symbols of America’s economic prosperity and prowess—crumbled to the ground!

Feelings of Fear and Vulnerability

It all seemed so unreal. Just two weeks earlier my family and I had driven by the World Trade Center while visiting NYC. Now it was a mountain of rubble, with nearly 3,000 lives lost in the process!

Our feelings of fear and vulnerability were only compounded by confirmation that this was a terrorist attack. Who would have ever thought that passenger planes would be used as bombs?

After a major scramble to get my guests on their way home via ground transportation—since air traffic over the US was immediately brought to a halt to safeguard against further attacks—the real shock and horror of 9/11 hit home. This generation now has its own day of infamy! The world as we know it will never be the same.

It is reported that since 9/11 we’ve become more afraid and less naïve as a society. Airport security—long lines, full body scan, and occasional pat-down—unwittingly serves to reinforce our sense of vulnerability. We are more aware of the differences between certain world religions and we’ve formed opinions about them.

More Aware of Our Common Humanity and Mortality

On a positive note, 9/11 evoked renewed religious commitment. There was a dramatic surge in church attendance in the weeks following. That was short-lived, though evidence of sustained spiritual interest remains. Some 200 Christian churches dot the landscape of Central and Lower Manhattan alone, a large percent of which have been planted since 2001.

Furthermore, surveys show that Americans have become more empathetic, more aware of their common humanity and mortality, and are generally more willing to give to charitable causes. It’s true—the worst of times tend to bring out the best in us.

Firefighters and paramedics put their lives on the line, many of them running into the burning infernos without a thought for their own safety, some never coming back out.

A store owner in Lower Manhattan emptied his shelves of shoes and sneakers, throwing them to people fleeing without footwear.

The Most Selfless Act

But perhaps the most selfless act that day happened on board United Flight 93. Its passengers quickly figured out that they were on a hijacked plane intended for the U.S. Capitol, so some of them decided to take action.

With four al-Qaeda terrorists on board, they knew the stakes were high, but figured it would be worth it. So they grouped, strategized, called final goodbyes to relatives and friends, prayed, and went into full action.

The plane went down in an open field near Shanksville, Pennsylvania, killing everyone on board, while sparing the intended target, and thereby spared a nation a much greater disaster.

Sadly, between a generation too young to remember 9/11, and others old enough to forget, that act of extraordinary courage is now a mere fading memory in our collective consciousness.

But I won’t soon forget my trip to Ground Zero a month after 9/11. As a former New Yorker who had been in and out of the Twin Towers, I needed to do this for my own psyche.

Stunningly, smoke was still rising from the rubble! The eerie silence reminded me of my visit to Auschwitz. Terrorist attacks aren’t isolated to the United States, nor evil to a particular time in history. Sin has always run deep in the human heart. The curse is heavy. The Devil, our chief adversary, is ruthless.

Our God is Sovereign

But God is sovereign. The world has not been the same, but He hasn’t changed. The Psalmist describes Him as “our refuge and strength, a very present help in time of trouble” (Psalm 46:1).

But God is sovereign. The world has not been the same, but He hasn’t changed. – Whaid Rose Click To Tweet

Life is full of 9/11’s—a fatal car accident, the death of a child or spouse, a terminal diagnosis, the loss of a job, mass shootings, and more. But none of these scenarios are beyond God’s sovereign care. Psalm 46 continues, “Therefore, we will not fear” (verse 2).

But trusting God doesn’t require a passive co-existence with the evils of this world. Elsewhere in the Psalms we are admonished, “You who love the Lord, hate evil!” (97:10).

One New York City pastor suggests that hatred for evil should begin with resisting “the terrorist tendency in our own hearts—the desire for quick and indiscriminate retaliation.” Turning hatred and hostility into works of love is the best platform from which to share Christ in a world made more afraid and less naïve by 9/11.

The image of the cross which emerged from the rubble at Ground Zero comes to mind. May it forever remind us that when all seems lost, Christ remains.